You are here: Home1 / cattle 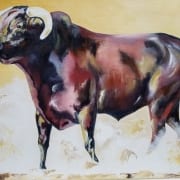 More than once, when artist Tanna Scott has shown her horse and cow paintings at an art festival or show, someone begins to cry.

The first time this happened, the Kennewick Western Artist was befuddled and perplexed. But she’s gotten used to it, and nowadays, when a viewer stands in front of one of her works and weeps, she knows why.

“I paint with lots of emotion,” Scott explains. “I care about each painting.

You can almost see the dust fly as two horses rear up in Tanna Scott’s original oil painting Two Horses.

“Usually, the painting has a story or the buyer comes to me with a story. Some stories are very emotional: the buyer associates the painting with a loved animal.”

A Horse That Was a Friend

One time, an impassioned viewer approached a horse painting and began to tear up. Scott walked over to talk to her, and together the two looked at the horse. The woman then told Scott about a most beloved horse that had just passed away. It looked exactly like Scott’s painting.

Another time, a man gravitated toward a painting of a roan horse. He told Scott that the horse in the painting was his dad’s horse.

“I replied the painting must look like his dad’s horse,” Scott says.  “He said, ‘That horse IS my dad’s horse!’

“He told me that he had to purchase that painting for his dad, who was very sick with cancer. His horse stands on the top of a hill each morning and looks down on the ranch.

“By that time, we were all in tears. I was so happy he was able to take the painting home to his dad.

“That painting has a home.”

While no one wants to provoke someone to cry or be sad, Scott recognizes the power of animals in people’s lives. Raised as an only child on ranches in Texas and California, Scott bonded early to horse and cattle. As a young child, she sat on the fence and drew what she saw. Later, when her dad took her to rodeos, she fell in love with the dirt and action, the grit and courage of the rodeo world, and continued to draw and paint. Every artwork, somehow, incorporates and integrates the world of the Cowboy: 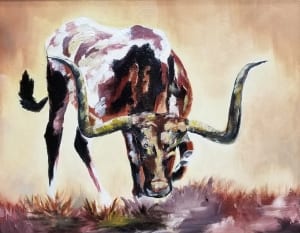 “With my oil paintings, I support the Cowboy way of life — Past, Present, and Future.”

For 25 years, Scott worked as a librarian and teacher at Eastgate Elementary in Kennewick, where she integrated art into her social studies curriculum. On the side, she taught art to students after school. Since retirement in 2017, Scott has added adult teaching to her schedule through the Kennewick Community Education program.

Scott has shown her work in various venues throughout the Pacific Northwest, including the Western Art Association show (Ellensburg, WA); the Bonanza Art Antiques and Gourmet Expo (Pendleton, OR); and the Pendleton Cattle Barons Celebration Weekend.

She is a member of Cyber Art 509, a cooperative of artists from the 509 area code who exhibit their work in businesses throughout the area.

Describing her home as her studio, Scott paints on a table in her kitchen, and fills the walls with works that are drying. Sometimes, she runs out of wall space and leans a work on a chair, but that shouldn’t stop people from visiting.

“Just move the painting out of the chair and sit down.”

Emotion Connects the Viewer with the Horse or Cattle

It’s all part of life: animals, action, relationships, memories, and like life, there are happy moments and sad moments. But what matters, Scott believes, is emotion: it is the glue that connects the viewer with the artwork.

“When a buyer identifies with a painting — when it resembles their animal or reminds them of a wonderful memory of an animal — it means so much more to them. And to me.

“I paint with feeling and want the animals to have character.” 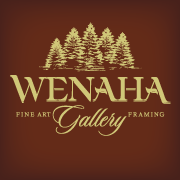 Tanna Scott is the featured Art Event at Wenaha Gallery from September 22 through October 19, 2020.

Contact the gallery, located at 219 East Main Street, Dayton, WA, by phone at 509.382.2124 or e-mail art@wenaha.com. Gallery hours are 9 a.m. to 6 p.m. from Monday through Friday, and by appointment. Visit the Wenaha Gallery website online at www.wenaha.com. 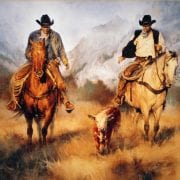 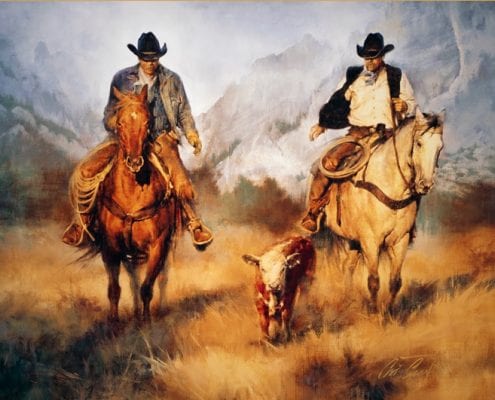 Back to Your Momma by Chris Owen

Thanks to the movies and TV, even the most citified of urban dwellers has a working knowledge of America’s icon, the cowboy: this legendary person wears a unique hat, sits a horse with cool assurance, swings a lasso, drinks appalling coffee, and speaks with a drawl.

But does this person still exist? Are there cowboys in the 21st century? 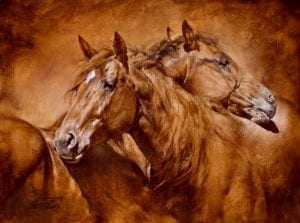 Yes, there are. According to Wide Open Country, an online platform showcasing country music and the rural lifestyle, more than one million beef producers in the U.S. are responsible for more than 94 million head of beef cattle. From major establishments to small ranches, cowboys are an essential part of cattle’s lives.

As a young boy spending summers on his grandparents’ small ranch in the Judith Basin, Owen embraced rural life, developing an appreciation for the importance of the agricultural community. His grandfather’s stories of meeting C.M. Russell — the late 19th, early 20th century cowboy, writer, environmentalist and artist — inspired dreams in a young boy that later, after art studies at Montana State University in Billings, and the Art Center College of Design in Pasadena, CA, grew into a professional career as a painter, capturing the real, gritty, literally earthy life of the contemporary cowboy. 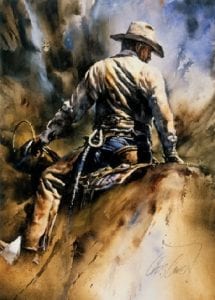 Holding Things Together by Chris Owen

“After my formal art education, I decided to work with the western cowboy and horse theme,” Owen explains. “I spent the first few years on several operating ranches in the region, and made acquaintance with working cowboy owners and employed cowboys.

“The experiences with them taught me a great deal.”

Not only from humans did Owen learn his subject, and learn it well. The owner of three horses — Jake, Buck, and Badger — Owen clues in on the animals’ non-verbal language with each other and their human companions, translating that language to canvas in works that, according to Mussari’s article, “are surprisingly dark and make rich of contrasts between light and dark.”

“There is a difficulty of the subject matter, painting human and horse figures with gesture, light, shapes, color and anatomical accuracy,” Owen says.

“Much of the western art has been more about illustration than the use of a more subjective approach of nonrepresentational art. 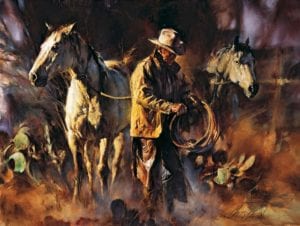 “I wanted to establish my own unique style which moves more toward these fine art concepts.”

In 2001, Owen contracted with Ashton Company, and later Somerset Art, to create prints of his work, but in 2011 he began his own publishing company, which provides high quality giclee art prints through select galleries.

Standing By, by Chris Owen

With a strong focus on earth tones — browns, umbers, burnt orange, and gold — Owen’s work celebrates the symbiotic relationship between cowboys and their horses. This is the real world of today, not a pretend or romanticized view of the past, with movement, action, and force, even when the subjects are standing still.

“I soon learned taking pictures from a horse on the gallop was not going to work,” Owen says of capturing the action of real life. “So, the idea of riding a horse at a loop, keeping up with a cowboy on the move at the same time taking pictures at the right angle in the right light was not a viable option.

“There is a challenge of painting action pieces.”

It is a challenge he has solved, fusing representational art with abstract overtones, translating a world that most of us know only as legend into images that the viewer can experience today, in real time.

“The cowboy endures as the foremost American icon,” Owen says. “His ongoing endurance as the premier American cultural hero stands as testament to the spirit and values that have made the West great.”

Contact the gallery, located at 219 East Main Street, Dayton, WA, by phone at 509.382.2124 or e-mail art@wenaha.com. Gallery hours are 9 a.m. to 6 p.m. from Monday through Saturday, and by appointment. Visit the Wenaha Gallery website online at www.wenaha.com.