The hauntingly beautiful music of Native American musicians Carlos Nakai and Mary Youngblood is nothing short of sublime. And while neither Grammy Award winner is a resident of Oregon or Washington state, some of the flutes that they have played originated in the studio of Roger McGee, a master flute maker from Joseph, OR.

“What a fine and gentle artist this man is,” Youngblood described McGee. “(The flute is) almost Georgia O’Keefish . . . very sensual and so carefully carved.”

McGee, who has created more than 1,000 custom, hand-made flutes, is a professional sculptor of 35 years standing, making his initial mark as an artist of western and wildlife bronzework. As a Vietnam War veteran, he considers it a high honor to have created four monuments placed in the Pacific Northwest, including the Jonathan Wainwright statue at the Veterans Medical Center in Walla Walla, Peo Peo Mox Mox near the Marc Hotel in the same town, and the VFW Globe in Salem, OR.

The path to creating Native American-style flutes, he explains, was a winding one. Like most artists, McGee listens to a variety of music for inspiration while working in his studio.

“I was particularly captivated by the haunting sounds of the Native American flute and wanted to learn as much as possible about this small instrument with the powerful voice.

“I was inspired to make a Native flute, and the awesome sound of the flute that I made captured my soul. It has changed my life and given me a new way to express myself with my art.”

Now, in addition to his bronzework, McGee has added the intricate detail of hand making, one at a time, highly individualized Native American flutes, an instrument with a history dating back reportedly 60,000 years (they are said to be the third oldest known musical instrument in the world). McGee creates all artwork, painting, woodwork and sculpture on his flutes free hand, burning the holes in with a hot metal rod. 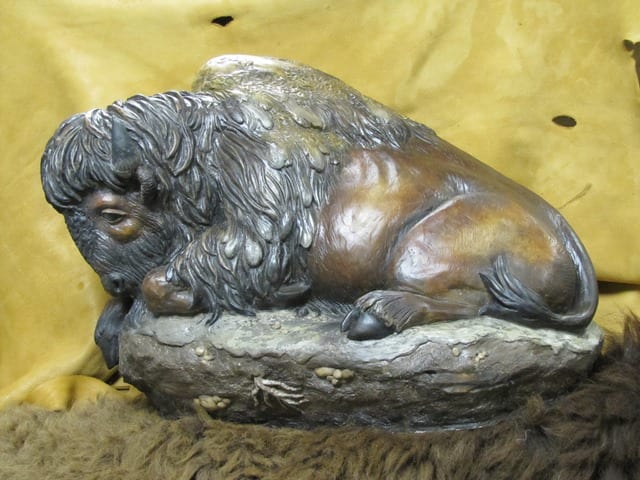 “I guess you could say that I follow where the artistic spirits guide me,” McGee says, adding that he not only makes the flutes, but plays them — with two CDs to his credit — as well as teaches others how to do so.

“Over the phone, I taught a Navaho Indian (Fred ‘Yellowknife’ Keams) how to make and play flutes . . . I also taught a Buddhist Monk (Park Jin Hong) from South Korea how to play the flute using Skype and the Internet!” McGee sells his flutes throughout the world, with other noted names who play McGee’s instruments including Grammy Award nominee Peter Phippen and recording artists Robert Mirabal and John Two-Hawks.

Inlaid shells, buffalo teeth, carved totems, feathers, beads, and paint are all part of the customized creations, with themes ranging from rattlesnakes and scorpions to horses and bears. In 2013, McGee won the Best Cultural Heritage Award at the Wallowa Valley Festival of the Arts for his Stone Crushed Inlayed American Flute, and in past years, his work has captured Directors Choice awards.

As beautiful as the flutes are to look upon, however, their ultimate test takes place in the playing, and McGee’s numerous clients have much to say about the creator, and what he creates.

“The beauty and soulful sincerity of this amazing instrument is only surpassed by the incredible artist who created it,” one musician writes on McGee’s website.

“The tone is amazing,” another fan said, describing how her husband, not knowing that she was playing her newly-purchased instrument, marveled at how much she had improved. “The flute made the sound jump a quantum leap — I sure wasn’t doing anything else much differently. The flute’s voice is just awesome.”

In his spare time, which he somehow finds despite a fulltime art schedule side-by-side with that of his wife, cut paper artist Cheri McGee, Roger has lately taken on refurbishing a totem pole, which when repaired, will return to the Creating Memories Camp for Disabled Children in Joseph. At the moment, the pole is in pieces as McGee fixes broken parts, fills cracks, sands, paints, and reassembles.

It’s all part of following that artistic muse, one that entered his life when he was the youngest of nine children growing up in the deep South, always using his hands to make things.

“It was easier to make myself a toy than it was to wait to get a store-bought one,” McGee remembers. “I have been very blessed!”

Roger and Cheri McGee are the featured artists at Wenaha Gallery’s Art Event from Monday, May 18 through Saturday, June 27, at Wenaha Gallery, 219 East Main Street, Dayton, WA. There is a reception for both artists on Saturday, May 23 from 10:30 a.m. (immediately after the town Memorial Day parade) until 2:30 p.m. Roger will play the flute during the reception. Free refreshments are provided.

Contact the gallery by phone at 800.755.2124 or e-mail art@wenaha.com. Gallery hours are 9 a.m. to 6 p.m. from Monday through Saturday, and by appointment. Visit the Wenaha Gallery website online at www.wenaha.com.

Why the World Needs Artists

Handcrafted Leather — The Functional and Beautiful Art of Jeremiah Colladay

Physician and Artist — The Pastel Paintings of Kirk Campaña

Honoring an Ingenious People – The Palus Museum Celebrates the Heritage of...